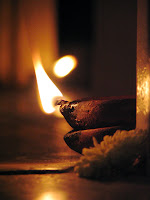 From Martinus Rulandus Lexicon of Alchemy :

The search for an unquenchable and ever-burning fire must be included among the quests, and if we are to believe what so many of them have affirmed, amongst the discoveries of the alchemists. Many marvelous accounts are related concerning the existence of everlasting lamps by the hundred and seventy authors who are said to have written on this subject. The discovery of the inextinguishable and enduring fire, like most of the transcendent secrets of alchemy and magic, is attributed to the ancient Egyptians, who hung lamps in the sepulchres of rich and noble persons. Many medieval writers affirm that on the opening of Egyptian and Roman tombs, which occurred occasionally in their own days, these lamps were found still burning but were at once extinguished on the admission of fresh air. The golden lamp wrought by Callimachus for the Athenian Temple of Minerva was replenished but once a year; another in the Temple of Jupiter Ammon is described Plutarch, whom the priests assured that it had burnt continually for years, and though it stood in the open air, neither wind nor water could extinguish it. Baptista Porta describes the discovery of a Roman sepulchre of marble, situated in a small island of the Bay of Naples. On opening it, a lamp was discovered diffusing a brilliant light, which dazzled and overwhelmed the beholders. It was extinguished instantaneously by the wind, but the inscription proved it to have been placed there before the birth of Christ. During the Papacy of Paul III a sepulchre was opened in the Appian Way, and there was found the entire body of a young girl, swimming in a bright liquor, which had so well preserved it that the face was beautiful, and like life itself. At her feet burned a lamp, but the flame vanished upon opening the tomb. This was supposed to be the body of Tullia, Cicero's daughter.
Some years previously a similar lamp was unearthed by a labourer, who, while digging in a field near Atteste, came upon an urn containing another urn, in which last there was deposited one of these miraculous lamps, the most wonderful of all those described in medieval treatises. The aliment of this lamp, says a writer who has treated of the subject, appeared to be a very exquisite crystal liquor, by the ever-during powers of which it continued to shine Mercury. It is at least certain that common substances were adapted in such a manner by the initiates that their natural imperfections were eliminated, and their concealed potencies developed to a high point of manifestation and activity.

The erudite Jesuit, Kircher, affirms that asbestos possesses the marvelous properties attributed by those who have recorded this experiment. He himself possessed a tablet of the substance in question which he used for writing purposes, and was accustomed to clean it by placing it in the fire, out of which it emerged white and shining. What is more to the purpose, he was acquainted with an asbestos lamp which burned for two years uninterruptedly, and was then stolen. He believed the extraordinary petrine substance to be composed of a species of talc, and a material akin to aluminium. The oil extracted from it was said to be a perpetual fuel, but later chemistry has failed to perform this operation; it has equally failed to extract the essential Oil of Gold, which was regarded as the fittest pabulum for the mystic flame, because of all metals gold wastes least when either heated or melted. Incombustible wicks were also made from the loadstone, which was supposed to burn in oil without being consumed, and the mysterious stone Carystios was endowed with the same properties. Another writer has attributed the alleged perpetuity of these flames to the consummate tenacity of the unctuous matter in which they were maintained, and to the exquisitely perfect balance between this and the strength of the flame.


Baptista Porta, having contemptuously noticed numerous experiments for extracting an inconsumable oil from metals, juniper-wood, magnets, etc., propounds as follows his own theory: If a flame were shut up in a glass and all vent-holes stopped close, if it could last one moment it would last continually, and could not be possibly put out. But how the flame should be lighted within a glass hermetically sealed is worth the while to know. Sometimes the old chemical writers give instructions for producing a light which, though not perpetual, has sufficiently extraordinary properties, as for example: Take four ounces of the herb Serpentinet, place them in a sealed vase, and cover them with warm horse manure for the space of fifteen days, when the matter will be transformed into small red worms, from which an oil must be extracted according to the
transcendent principles of the Hermetic Art. With this oil a lamp may be trimmed, which, set to burn in any room, will cast all within it into a slumber so profound that no power can awaken them so long as the lamp continues burning. (-end)

Isn't it something marvellous ? Do you see the link with the little red light in the Chruch near the Autel, symbolizing (because now, it is no more effective) the Presence of the Christ ? An Alchemist able to do produce this can perform miracles with this wondrous flame. There is all a Theurgy linked with Fire, in order to bring Awakening, Healing etc. Fire is a door to the Solar Realm. And when a Flame is nourrished by something very pure, the Fire itself become Eternal and of a very high/spiritual quality. Can you imagine the difference between a vulgar candle's fire and an Eternal Lamp's Fire during the last coction in the Magnum Opus ? Don't you think the quality of the Stone, nourrished by this fire, will not be different and extremely Higher ?
In fact such Eternal Lamps are fueled with the Quintessence of the Philosopher Stone, an Oil (Sulfur) able to bear Fire, and because it is corporealized Fire itself, cannot be consumed in anyway, and thus is able to be lighted perpetually. Of course, by Archemy it is possible to create long life lamps, but not Eternal one.
It is also said that some Stones, onces Multiplied, can bring a Light.
Eternal Light can also shine more brillantly (like the Rabbi's one) when an awaken, or spiritual person comes by.
You can see that these Lamps were often discovered in tombs, maybe in link with the idea of a resurection or a protection for eternity, maybe the Soul was beleived to penetrate within the flame and then to find the Paradise or some kind of Life in the Other World (which is indeed possible with such a divine fire). The conservation of the Body of the Little girl is also a demonstration of a very  high kind of Alchemy, which makes me feel very humble toward these ancients Alchemists and Adepts/Theurges, who had no "modern" tools, ovens, glassware, long lasting graphite crucibles... and now that we have all this at hand ... what do we realize ?

Franz Bardon in it's Book on Magical Evocation say about the Lamp :
The magic lamp, known as the so-called laterna magica, is also quite often referred to in many grimoires and in the oldest books dealing with evocations. It represents, in the practice of ritual magic, a very important aid, and the magician will surely want to make use of it in his work. The magic lamp is the symbol of enlightenment, cognition, experience, intuition and the inner light; in short, all symbolic analogies of the light are represented by the magic lamp. Lighting the magic lamp is, from the hermetic point of view, equivalent to lighting the magician's inner light, and having it burn like a flame. Colour, which comprises the quality, vibration and oscillation of the light, is also one of the mysteries of the magic lamp. The quality of a being or of a sphere is expressed by the being's character. The purer and brighter the coloured atmosphere of a being or sphere takes shape and the more it shines and glistens the higher is its intelligence and the purer is its quality. Low or negative beings appear in a dark and cloudy, (that is, an unclean), colour.


To know all this is of greatest importance to the magician practising ritual magic. His enlightenment is symbolically expressed by the lamp.
(...)
The charged spirit, when set to flame, helps create a favourable atmosphere, which will also contribute to bringing about good results.

The spirit-flame may also be charged for clairvoyance or for different operations with the magic mirror, or for other astral magic operations which need no artificiallight. If the magician is operating in a closed room, the lamp may be placed in the magic circle or into a corner of the room. It is most advantageous to fix it in a position above the magician's head, so that the room is evenly illuminated. When lighting the lamp, the magician has to meditate and concentrate on the uniform kindling of the inner light of soul and spirit.
By .: Salazius Hermès D'Artigné :. No comments: