"The Famous Elixir Of Life"

First of all, we will separate the text into logical parts for more clarity and in order to analyse it together.

1. In the proper season of the year, when the herb is at its full growth, and, consequently, its juices in their  hole vigor, gather at the fittest time of the day (when Jupiter is rising and the Moon in Cancer is applying to a conjunction, sextile or trine aspect thereto), a sufficient quantity of Balm, wipe it clean and pick it;

2. then put it in a stone mortar, and by laborious beating, reduce it into a thin pap.

3. Take this glutinous substance and put it into a bolt head, which is to be hermetically sealed, place it in a dunghill or gentle heat equivalent thereto, where it must digest for forty days. When it is taken out, the matter will appear clearer than ever, and have a quicker scent.

4. Then, separate the grosser parts, which however are not to be thrown away.

5. Put this liquid in a gentle bath so that the remaining gross particles may perfectly subside.

6. In the meantime, dry and calcine the grosser parts (which remained after the above separation) and extract their fixed Salt, which is to be joined to the liquor when filtrated.

7. Next, take sea Salt, well purified, melt it and by setting it in a cold place, it will dissolve in the humidity of night air and become clear and limpid.

8. Take of both Liquors ana (same quantities) and mix them thoroughly, and having hermetically sealed them in a proper glass, let them be carefully exposed to the sun, in the warmest season of the year for about six weeks.

9. At the end of this space, the Primum ENS of the balm will appear swimming at the top like a bright green oil, which is to be carefully separated and then preserved.

10. Of this oil, a few drops taken in a glass of wine for several days together, will bring to pass those wonders that are reported of the Countess of Desmond and others; for it will entirely change the juices of the human body, reviving the decaying frame of life and restoring the spirits of long lost youth.
The author who records this curious discovery remarks: “If after the medicine is thus prepared, if any doubt be had of its efficacy, or of its manner of operation, let a few drops be given every day on raw meat to any old dog or cat, and in less than a fortnight, by the changing of their coats and other incontestable changes, the virtue of this preparation will sufficiently appear." 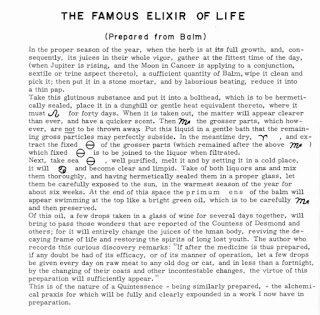 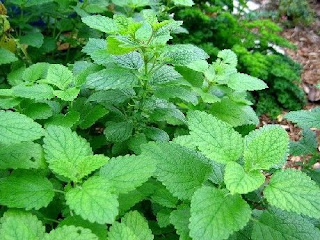 Melissa is said to be a Jupiterian plant, with essential oil, some said maybe, the EO, comes at the end of the product and is considered to be the ENS. Why not. But a simple Eo can't do the "miracles" of rejuvenation that is said to be done with this ENS. Some also, said that the name "melissa" or "balm" is a code name for another matter, linked with bees, honey ... why not. Who knows ? We have clearly no clues about that. Simply this little text above.

Also, IMO, a simple spagerical preparation can't do this. Here, we are in presence of something that is clearly processed and an evolved Sulfur principle.

1. This is the gathering of the plant with the proper astrological indications. We see that it is important to have the plant in its full vigor, in order to have the substance of "life" in it.

2.  Make a thin pesto. I guess we have here already a first oxydation of the plant.

3. 40 days putrefaction at approx 40°C, for circulation.
Taken out, it is clearer than ever ? Not darker ? I guess there is a problem in the translation here ... Maybe it is brighter (like bright dark colour).

4. "separate the grosser parts", ok, do we filter or do we distill ? Which makes a HUGE difference.

5. It seems to be a filtration then. And we let stand the matter in order for the remaining matter to subside.

6. It seems to be a vulgar calcination with fire. We have the fix salt hereafter. For now, there is no big secrets ...

7. Sea Salt ... Is it the same Salt as exposed in the Leyden Letter ? From Saint Uber (above) ? Like ... the Philosophical Salt ? Dew !? Or is it really normal sea salt ? If we follow the idea of the process we get a deliquescent normal sea salt. Some would say it will attract Spiritus Mundi, but per se, no, it is just water in the air. And there would be the trick and the real thing... In this case, the sea salt must then be prepared philosophically before in order to be made as a proper magnet, and disposed as needed in order to catch the Spiritus Mundi.

8. So now, we take both salts together and the previously filtrered liquor, and we mix them - "in a proper glass" (what does that really mean ?). We let stand the compound for approx. 40 days again, to the sun, in summer. Joining liquors can also mean "to distill them together" and making them united by several cohobations or circulations...

9. A green oil ? Green is really weird. If it is properly cooked, the swimming oil must be reddish and not crude/green.

10. A miracle medicine to restore youth comes out of it.

It seems the text is not complete nor really explicit about certain things, and probably that the person who took notes of it had only a partial explanation. This is probably only the top of the iceberg and the real deal is omited.
By .: Salazius Hermès D'Artigné :. 4 comments: Liens vers ce message