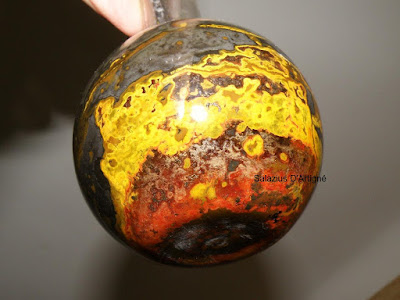 PHOTO 3
TITLE:  Chaos of the World

This is powderd Stibine (Antimony Ore) under a Secret
Fire action. The first reaction of the matter is to show a strong
reaction, with all these pleasing colours to witness : black, red,
orange, yellow, grey, olive green and brown. 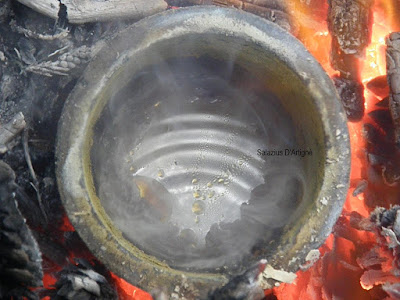 During the process of the Simple Dry Wayof Antimony, the
metal can behave strangely, and begin to boil with a normal
temperature. He is releasing another Fire, the Salamander,
the Spirit of the Fire Element, is said to be present. the metal
begin to boil and when they reach the surface, they create this
riples. 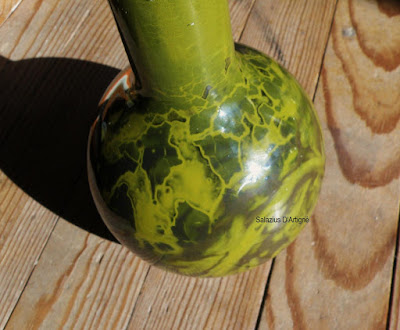 A High Spageric process giving at the Vegetatio Stage some
weird forms, alike continents moving and recreating the
tectonics in a microcosm. 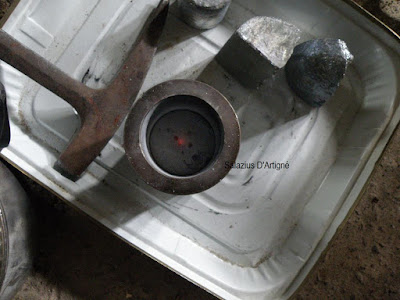 After pouring Antimony, the Fire contained in the regulus is
reducing itself to a central point. This phenomenon can only be
witnessed in darkness. This is happening very quickly and one
have to hurry in order to catch the perfect moment for the shot. 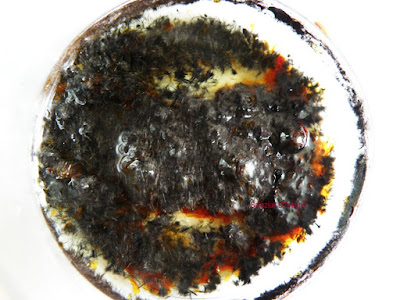 Gold leaves under the effect of a Particular Alkahest. The first
stage is here happening, the Putrefaction or Nigredo. Slowly
all the mass will be black. 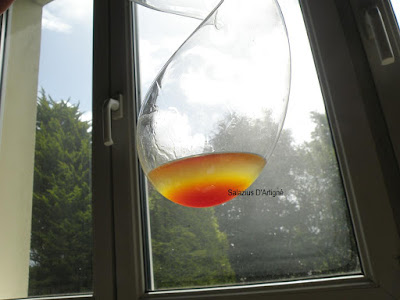 In a tincture of gold, different layers are forming after the
reunion of the first distillate upon the reduced tincture. The oil
of gold or its so called "Sulfur" is denser than the almost pure
Spiritus Vini. They don't mixt at first, but after slowly revolving
the retort, the colour finish to be of a very nice orange red. 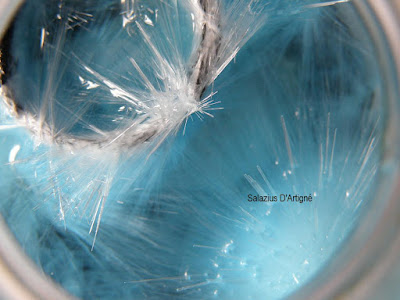 A simple experiment taking place with copper and a
mixture of tartar salt/K2CO3. A very nice crystallisation first
took place, then an extraction of the colour of the copper, wich
is of a very nice pale blue colour.