Blackness is an interaction of the Principles, as a Chaos. Or disequilibrated phase of arrangement of the elements. It is a medium phase between two equilibriums.

A Turba. A Massa-Turba/tio or action to make something to get out. 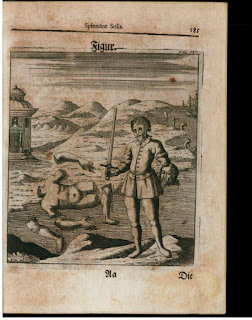 The first one is the peeling and removing the flesh/sulfur from the body (salt) and releasing the principles of the matter. This is the breaking down. Solve. Separatio.

Once the bones are cleaned from flesh, a new body can be construct upon it.

But, by conjunctioof Salt and Sulfur (Red King and White Queen, Sun and Moon), via the Mercury effect, there is a fusion of both, and generating a New Black. So, Conjunctio is the New Black.

There is several "blackness", and they all involve Mercury as responsible for this. He is the one that marries the Principles or make them divorce.

So, in its action, Mercury acts as Cupid or a Bishop, sometimes Venus, blessing, uniting, marrying and magnetizing the King & Queen. Or, as Death, or soldiers, with swords and scythe, cutting the link and separating them, spilling blood & putting into pieces the King's body.

All black are not the same, as all peacock also...
By .: Salazius Hermès D'Artigné :. No comments: Liens vers ce message