Ecto-mists, ghosts, astral memories, poltergheists, possessions, vampires, demons, angels ... the world of the spirits is full of surprises ! I've been "initiated" in a early age to all these things with my familly and it's always a pleasure to read stories and looking at tv shows on the subject. I'm not a Ghost Hunter. I'm not used to go in graveyards at midnight. 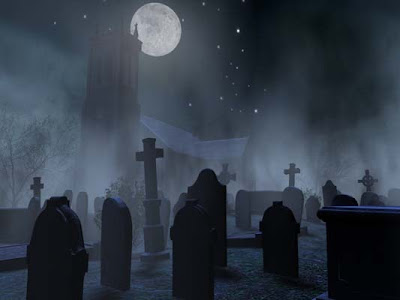 Generally I avoid places with spirits. They have their space, and I have mine.
Anyway I'm not against visiting graveyards when I can. I've recently been in Paris in Père Lachaise, where a lot of artists and great men are buried, and I visited it with friends. One of them, Anita, is psychic and before going there she mentioned that she wouldn't come with us since she is always annoyed with random spirits.
I proposed her to do a relaxation with the erection of a shield. I conducted her to a personnal sanctuary where she met her guides.
And everything was ok for her during the visit.
But I didn't asked for such protection :) I've felt ghosts there, and I jumped one time by surprise and ran few meters because I felt so strongly the presence of this mass of energy ... and my inner alarm was ringing ! But everything ended well and we enjoyed a fresh drink after that. I've been reading since two days a book of Melba Goodwin "Chasing Graveyard Ghosts" at Llewellyn publications (here some ghost photos), and at the end of the book is mentioned some odd inscriptions on graves like :
In Bolton-on-Swale in Yorkshire, "Henry Jenkins - 169 years old - Born in 1501 - dead in 1670."
In the church yard of St Luke in Bristol "1542 Thomas Newman, aged of 153 years old" This stone were restaured in 1771 in order to keep in memory this incredible age !
In Williaston, in Cheschire, Thomas Parr's epitaph says : died in Shropshire, in 1635, at 152 years old, burried in the abbey of Westminster.
Thomas Damme, born in Chester died at 154 years old.
Isaac Ingall, in Sussex, 120 years old.
In the church yard of Stoke-on-trent, Henry and Sibil Clarke, both died in 1684, 112 years old ...
Matthew Peat, from Wirksworth in Derbyshire, 112 years old.
Sarah Jarvis, from Corsham in Wiltshire, dead in 1753 at 107 years old. It is said that before her death she had a third dentition.
And a last one : William Billinge, from Longnor, in Staffordshire, born in a field of corns, and served in Gibraltar, died in 1791, at 112 years old.
Well, I hope this is not too long ... But I never heard about such things before this author mentioned this in her book. Incredible.
This man living for 169 yo ... 152, 153, 154 yo ! 120 yo, three of them at 112 yo !


Is it true ? Were the dates of birth properly recored ? Did some of them took some special Philosophical Steroids ? It's okay to live up to 100, or even 112 years old. But it's odd to go up to 150 or 170 !
Hmmm a lot of questions and no answers. A necroman, a medium, a spirit, could ask the "dead" person if it is true.
Sarah Jarvis's *third* dentition is not a fairy tale, I head about a Thaï woman that had a third one too at approx 70 yo. The other one was appeared at 45 yo (well, that's what my memory tells me, I'm not that sure about the age !).
She complained that it was a painful moment ... Well, sharks regrow teeth all along their life after all. Why not humans ? Maybe this is a normal and natural condition. Not regrowing teeth is maybe abnormal.
A 107-year-old Chinese woman was surprised when she suddenly discovered two new teeth in her mouth, Chinese media said on Thursday.
Jiao Zhenwa, a resident of Yichuan county in China's eastern Henan province, has been demonstrating her new teeth to curious friends, relatives and neighbours, the China Daily said.
Chinese dentists were also astonished by the incident and said it was a rare natural phenomenon.
According to official reports, there are more than 40,000 centenarians living in China.
BEIJING, November 19 (RIA November)
Source here
This is a natural phenomenom. But as we know, we can provoke it. Philosophically.
Well, even ghosts can lead us to Philosophy ... I love that :)
But still, I won't go into grave yards at night ! Just read Melba's books (the other one is "Ghost Worlds" same publisher), you'll see that their excursions are often finished abruptely with a quick run and an adrenalin rush ... :)
By .: Salazius Hermès D'Artigné :. 2 comments: