The Rings of Fulcanelli. 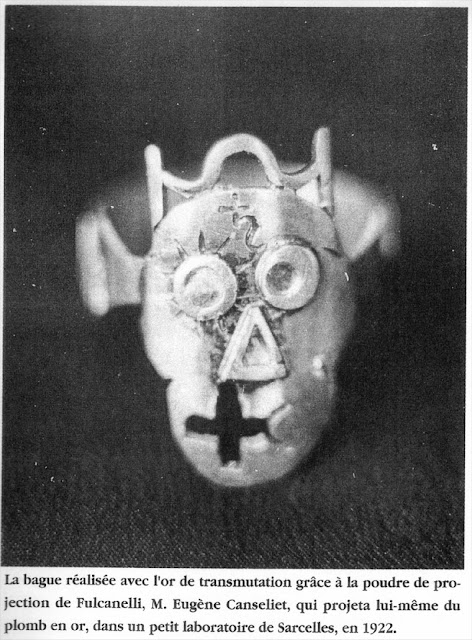 The ring, realized with transmutation gold via the Fulcanelli's powder of projection, M Eugène Canseliet, who projected lead into gold, in a small laboratory of Sarcelles, in 1922.

I've heard also of a ring, belonging to Fulcanelli, that he received from a Monastery, a Commandery of Edmond Rostant in Brittany (Bretagne in the west of France).
Maybe the ring on the image was made on the model of this one.

The first thing we can notice is that it is a skull. In Alchemy it is the "caput", or dead head. It is the matter in a state of putrefaction. It is crowned with the symbol of the spirit, representing the mercurial principle. Also used in the Libra symbol, since it is an air sign.

We can see several things on this ring.The Sun and Moon, between the two the symbol of saturn. We can notice the same symbolism used on the image under. 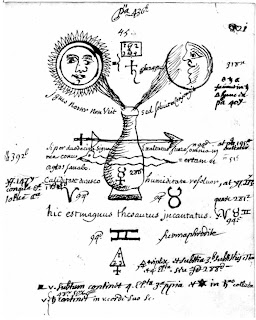 The nose is a triangle, symbolizing the fire, or the Sulfur, with the cross under it. This cross maked the mouth, and there is a little circle on its side, it could represent the symbol of Antimony.