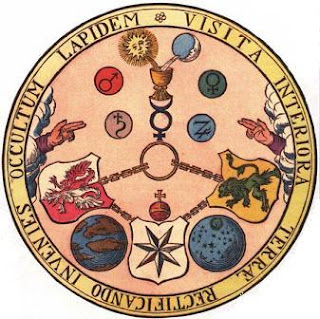 This latin acronym is very famous in the alchemical world. It means : Visit the interior of the Earth, and by rectifying, you will find the hidden stone, universal medicine, sometime it is true (Veritam) medicine, but it is a U and not a V, so I prefer to say "universal".
First of all, we have to visit, not to take something, not to do something, nor seeking for something, but, just to look, to visit the interior of the earth. We have to look deeply at something hidden normally (the interior of), the earth is here the macrocosm and all its microcosm, earth can be understood as a general term for the world and the creation, Nature. So, we have to unveil the laws and mechanisms of the macrocosm.
The first part is the study.
Then we have to rectify, we have to do an action, upon something, in order to have the Stone.
Rectifying is a correction, rectification : to make it right, perfect, able to fit to the purpose of the generation of the Stone. What do we have to rectify, and what do we rectify while visiting the Nature if not our vision of the World and Nature ?
And then, we find the hidden Stone, universal and true medicine ! We find it because we are in the natural path, and no more a cultural one, that prevents us to see and find the Stone (and generate it). It is hidden because it is everywhere, and no one can see it, until one finds it by rectification.
But, in reality, we rectify and then we find the Stone, because it appears after the act of rectification, it appears as a natural consequence, we have to do nothing ! (see Aurora of the Philosophers by Paracelsus, chap XVII).
It is Universal, simply because the Mercury is Universal, and the Vitriol is our Mercury. And it is a medicine, because Light incarnated is the most important thing on earth, it is a blessing, the true blood and body of Christ Principle.
By .: Salazius Hermès D'Artigné :. 1 comment:

King Solomon's Mines, in the earth of Ophir

King Solomon (Solomon mean 'wisdom' in hebrew), is well known for his temple and wealth, also for some treatrise of magick (Clavicula Salomonis - but I don't think he ever wrote that...).
When the symbols become clearer, and when can figure out a little the Opus Magnum, we can see some links between Alchemy and some sacred texts, like Bible. Bible is said to have stories that are all alchemical, from alpha to omega, Roger Caro, french Alchemist working upon Cinnabar, used it extensively in order to explain the Magnum Opus.

The Alchemist plays sometime a perilous game with matter. We tremendously and dramatically enhance the inner process of his inner Alchemical cycle.

Remember that a cycle is cyclic. You are now, in one of the cycle, and maybe in one mini cycle in the big cycle. I found that we can be enclosed in three cycles, or even four, like Matriochka... it asks a little of inner analysis in order to 'see' them, and to feel them. For that you can try to study the seasons in nature for example.
Have a nice cycle !
By .: Salazius Hermès D'Artigné :. 6 comments: