Following a request from one of the reader of this blog, I'll translate the article available here (originally in french/ originalement en Français). 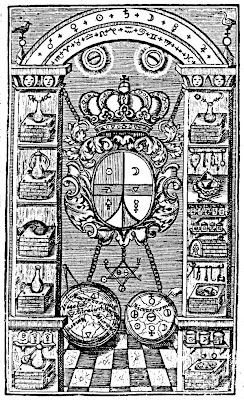 This first page is extremely rich in symbolism. We could consider that these engravings were alike photographies of what was happening in laboratories at that time.  We find there some "hermetical equations" a sort of math of energies and substances, of which operations do not only contain soustraction, multiplication, division, etc, but alsocoagulation, congelation (it is not freezing), sublimation, circulation, cohobation, putrefaction, distillation, etc. These pratices et processes could be wirtten in a linear way (I sometimes do it) based only on symbols.

It would be impossible for me to deliver here the overall of all the operations that are described here, because of the seal of secret and also by their number. Nevertheless, some big symbols are there.

From the upper part : on the left we have, perched on our antimony and a small capital, a raven, symbol of the nigredo, first regimen of fire or Blackness, on the other side, on an equivalent posture, a swan, symbol of the second or sometime third, regimen of Fire or Whitness, Albedo. Between both, a bridge, of which the superior part concerns the planets, and the second, under it, their daily and nocturnal houses. We will notice that saturn is on the center, at the uttermost part, and there is a reason for that of course, both luminaries are equally placed to its sides, logically.

The peacock and the Phoenix  are not represented, because who knows how to make the black, gets the Green, and who knows how to get the White, gets the Red. It seems then, that the author takes a shortcut, maybe by a lack of space, or in the will to show only what is essential.

Two columns now, on each sides, describes the operations of the Magnum Opus. Ten boxes, ten operations. Are they logically distributed or simply here randomly given in order to illustrate some of the major processes ? Who knows, really. If ever we choose to give some logic, then :

On the left one, at the top, the operations begins with a first flask, where is shown the conjunctio of Sulfur and Mercury (Chemical wedding). Under it, the circulation (possibly in fact a putrefaction). Then a distillation (or several who knows).
In the fourth, its digestion, in the last one, seperation of principles : a volatile Sulfur and a volatile Mercury (see the little "hat" on the symbol of the Principles in the jars on the shelve), and a fix salt (reversed "hat").

It seems that the rest of the operations are not given, being logical to those who know the of the laws ...

In the right hand column, we can see that there is now conjunctio on the sun and moon. The process is seemingly the wet path here, decribed. And continues after having the the Stone (all colours) and as Dry path under it. It seems that there is a bunch of metallic operations (metals in jars, or symbolic of colours), and derived preparations with the Stone, alike getting a perpetual mine of gold or silver...

So several jars seems to contains metals, under it, on the second shelve, salt, precipited gold in calx maybe (but its symbol is different) and maybe again, some salt of urine.

Under it a oven with tool to work in dry path, like clamps, shovel, ingot mold.

In the last window, the Sun, the Moon, or Gold and Silver (maybe the philosophical ones also), Sulfur and Mercury together (thus nothing to do with a mineral ethiop). The same oven under it.
At the center on the top, a Crown, symbol of acheivement of the Magnum Opus and of a lot more than it is possible to say. In the central oval or egg, we have to sides, a male on the left, and a female on the right. We have the commun version with Sun and Moon, but also the signe of Fire and Water, and under it, the Philosophical Version of Sulfur and Mercury. (On the top luminaries : sky, in the world of the middle, elements, and in the lower world, principles of matter).
The chains showns us that everything is linked and united. But  also that the upper and the lower can communicate.

Under it an hexagram, union of the upper and the lower, with the presence of Mercury and Sulfur, Sol and Luna, Vitriol, and in the center, seemingly two symbols for salt, a light one and a darker one.

The terrestrial sphere on the right has the symbols of antimony, vitriol, gold, niter and salt, and luna, venus. It is stated to be part of the microcosm.

On the other side the sphere bears the names of "macrocosm", "astral", "vegetal", "mineral", "animal", in short, of the different kingdoms of existence of which hermetism speaks.

The paving is black and white, is there any Maconnic influence here already ? I don't know, but it can be seen as an idea of both polarities in interplay in this world, an equilibrium in the macro & microcosme. 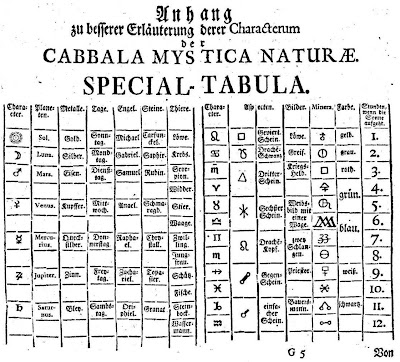 A symbols table allowed, in a glimpse, to get all the signatures of matters and related planets.
The fifth column with the symbols tells us (from up to down) : antimony, niter, urine's salt or urine, sulfur, vitriol, marcassite, cinnabar, sea salt, tartar salt, ammoniacsalt, magnetite & arsenic.