Chemistry and Alchemical understanding of the Matter

From the scientific point of view, old Alchemists considered matter in a very strange way, even when complex, it was seen as "one" in the beginning, not by the chemical compounds of course, but by its inner "nature" or "quality". An example :
Iron sulphate, was considered as Green Vitrol. The nowadays chemist will call it by it's scientific name, "Iron Sulphate", and create thus a chemical duality, Iron + Sulfate. The Alchemist do not consider this matter like a duality. It is for them, "Green Vitriol". Not a sulphate, but a "Salt" nature, like Niter or Tartar, or Sea Salt, Alum ... and the quality of this salt was more important than what was in it. We know for example that Niter is fiery and also full of "air", sea salt is not at all like that, it is neutral, and cannot be entirely sublimated (apart it's acidic spirit when in dry distillation) like sal ammoniac for example, full of air too ! 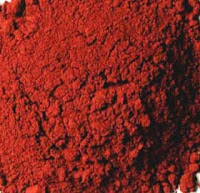 "Iron oxide" or "Crocus Martis". A Red Sulphur.
Of course, they did "chemical" things, like mercurial sublimate (corrosive sublimate) by putting muriatic acid (okay ... HCl :) ) and Hydragyrum or "Hg"/Quicksilver, and after by distillating it, but it was not by chemical knowledge, but more by an hermetical understanding. But a chemical thing say nothing about the hermetical nature of this matter. Mercury is a volatile metal, full of fire and air (of fire because it is liquid, and air because it is easely volatilized), add it an acidic nature that gives it a power over metals (fire in a water or a mercury), and "tadam !" you have a kind of "milk", having the power of both elements, Hg and HCl, isn't that beautiful ? Two mercuries together give birth to a more complete mercury ... nice. But this Mercury is seen as ONE thing, not a compound of the two chemical elements. 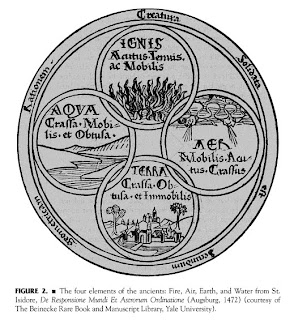 Four elements into one. The elemental vision is purely an hermetical one.
Maybe you don't know that in alchemy, Red + White = Black,a nd Black + Fire and Secret Fire = green, white, yellow, and red :)
Also know that Sulfur plus Mercury plus Salt = One Stone. So, 1 + 1 + 1 = 1
And one give 3 or 4. And these number, not changing in quantity, can change in quality !

Vitriol of Mars Red Oil by distillation
(from Patrick Rivière's website).
And even if they understood that these three principles (sulfur, mercury, and salt) where united into one part, making for example one "dragon" or one "lion", they still could use their vision of "triality", in this unitary use of the matter.
We change our point of view when we need it. And a little like a quantum physic, we use matter as we want, considering what we want to do.
By .: Salazius Hermès D'Artigné :. 5 comments: