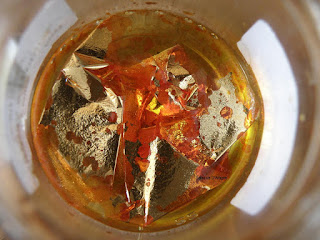 TITLE: Gold opening
Spageric process concerning the opening of gold for
it's future extraction. I remove the thin layer protecting Gold with
a special liquid, able to open, but not to extract. The whole
process can  take place at room temperature. 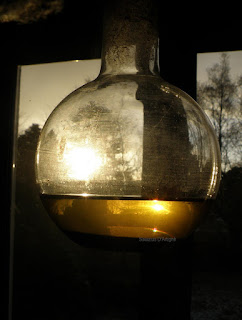 TITLE: Winter's sun
Sun rising with difficulty during a cold morning of winter.
Checking the preparation and the evolution of a process
during the night. both atmosphere were perfectly matching,
since the flaskis containing a "nigredo" (black or putrefaction
stage) in process. 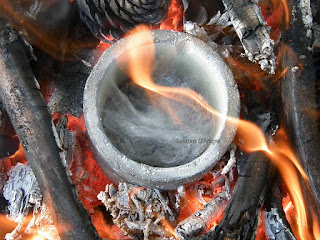 TITLE: A Salamander
During the process of the melting of the Antimony, one
can sometime give a little piece of metal as gift, for the
Salamander, in order to nourish them and thnaking them for
their help. Here this tonge of fire can be seen as a
manifestation of a Fire Spirit since generally, a flame is not so
long. 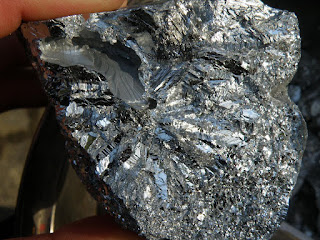 TITLE: Cave and Star
The Antimony Dry Path. Once melted and poured, the
Regulus (the piece of metal) cool and crystallize, giving in it's
structure a cave, and a star just under the cave, we can see it
as a kind of radiation. One can sometime, after having
manifested these two elements, see a golden colour under the
cave, in the middle of the star. It is the "Light" beginning to
gather in order to give birth to the embryo of the Philosopher
Stone. 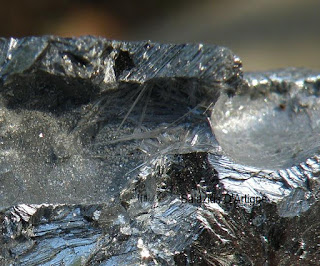 TITLE:  The Dragon
White flower of Antimony is the name of this Antimony
trioxyde formation. Flower is the name of a volatile compound.
Here, the formation is exeptional since it is quite rare to have
such big 'hair' in a cave. It is almost the same process that
happens in geods. But here without water and soluble salts,
just by volatilisation. 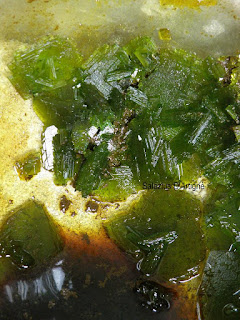 TITLE: Esmeraldas
This is a personal path called "the Way of the Moor
Man". This is something very simple. I didn't expect to find
these crystallisations in the bottom of the Alambic. I consider
such things as gifts in my practice. 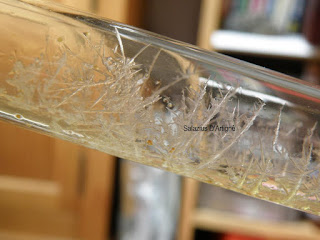 TITLE: Hot Snow
This is a distillation of urine. At a moment, Ammonia
salts will begin to make stars and very beautiful patterns in the
Alambic. Because of the fresh smell and taste of ammonia, I
give it the name of Hot snow. One can witness some golden
drops. It is a volatile sulfur in urine. The smell is absolutely
terrible. 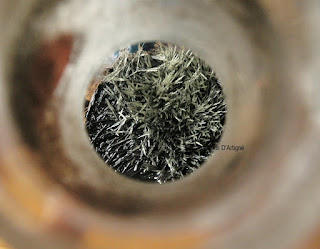 TITLE: Mineral grass
This is not a "normal" crystallisation, the salt used do
not take this shape, nor this colour. It was a total surprise for
me, I didn't expect that at all. I gave it the name of Mineral
Grass, simply because it grows out of a mineral and on a
black earth. 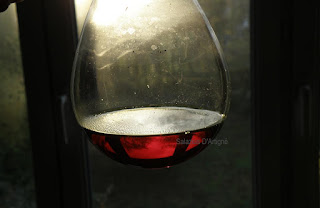 TITLE: Dragon's blood
This is a distillation of Antimony's Sulfur or blood. The
photo will never take the amazingly deep colour. It's like a
profound ruby, with a kind of pulse in it, a life and a power. 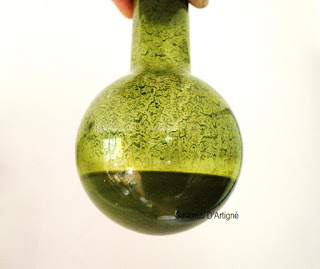 TITLE: Vegetatio
Sometime colours happen, and let us in a state of
astonishment. How could a mineral under the influence of a
"mercury" could take so much colours, from Black, to Green
(Vegetatio), to Whie and then Red ? 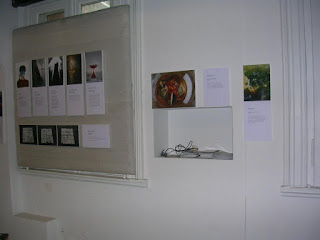 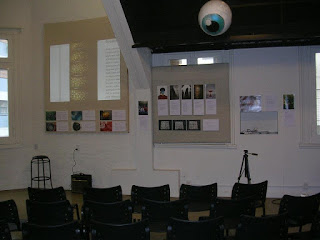 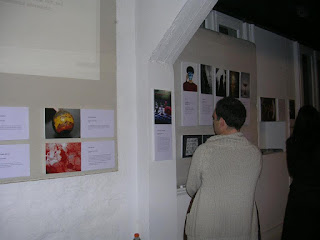 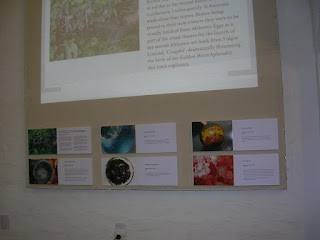 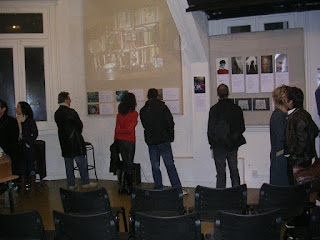